Shikoku Henro and the 88 Temples 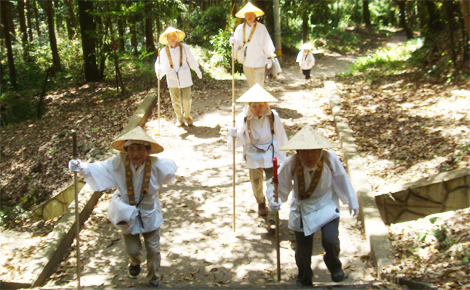 Shikoku Henro and the 88 Temples
by Jordan Mounteer

One of the reasons I fell in love with Japan was because of its history both spiritually, militarily, socially, and culturally, there were a lot of elements that have always appealed to me about this country. But one thing in particular that has always stood out for me is the presence of pilgrimage routes, long trails that bisected through farmland, cities, and coastlines and were designed to test someone, both physically and mentally. Having already experienced the Kumano Kodo near Wakayama Prefecture, I knew my next challenge was the Shikoku Henro: a 1200 kilometer loop that encompassed the entire island of Shikoku.

The route also known as the 88 Temple Pilgrimage was first envisioned by the monk Kukai, or Kobo Daishi, who founded the Shingon Sect of esoteric Buddhism. From Osaka I took a bus that took me west toward Kobe, and then over the suspension bridge to Awaji Island, and across to Tokushima where most pilgrims begin the 50 to 60 day trek. I set off early, taking a train to the first temple Ryozenji, where most pilgrims will purchase an outfit that consists of a walking staff (kongozoe), a white vest (hakui), stampbook (nokyocho), and a traditional sedge hat (sugegasa). In good spirits, I set off, following my map and iconic stickers that marked the trail which would often lead through private property and backyards.

Needless to say, by the end of the first day I my feet were sore and blistered from walking on pavement, and I pitched my tent next to a small stream and promptly fell asleep. When morning came and I exited my tent, I was horrified to notice a sign right beside me warning about mamushi, or venomous black snakes, in the area. Before long I crossed a valley and began one of the more difficult stretches that wends its way into the mountains up steep switchbacks toward Fujidera and Shosanji, the 11th and 12th temples. As luck would have it, I didn’t check the weather, and as evening descended it began to rain gentle at first, and then it became an onslaught, pounding down like a relentless mortar and pestle on the canopy of trees.

I reached Fujidera and quickly set up my tent just as the wind picked up. Little did I know that a typhoon was rolling in off the coast. By time morning rolled around, it was still pouring, and I discovered that my rain jacket and my pack cover were both not waterproof. Stuck in the middle of the woods, and a good day’s walk in either direction from any city, I trudged up paths that became small rivers where tiny frogs would jump out of the way of my feet. By time I reached Shosanji the rain was torrential and I could barely see a few feet in front of me, and even as I followed stone lanterns to the temple I could feel the violence of the weather threatening to blow me off the mountain. That night, shivering and doubting whether I should have undertaken such a journey, I sought refuge in a small shrine and slept fitfully all night.

Many pilgrims will invariably become familiar along the trail with the practice of osettai. Since those who decide to follow in Kobo Daishi’s footsteps are in a metaphorical sense thought to inhabit his spirit, it is not uncommon for pedestrians and everyday people to come up to you in the middle of the street and offer you money or gifts of food. At first I was reluctant to accept such posterity; I didn’t really need any money, and I felt bad taking it, especially from elderly people who were always enamored to see young people undertaking the pilgrimage. But soon I realized that it wasn’t so much about me. One morning, after sleeping under a bridge near Katsuura Town, a young father drove past and handed me 5000 Yen, equivalent to $50, and smiled eagerly as he bid me on my way. The more I thought about it that day, the more I realized at least to some degree what this pilgrimage was all about, what indeed all spirituality was about at its most fundamental: gratitude. From that point on I never expected gifts, but I was always grateful and accepting of them.

The more I walked, the more I realized that walking was in and of itself a form of meditation. The steady rhythm of your feet, the sound of your own pulse in your temples,

At long last I made it to Hiwasa and Yakuoji, the 23rd temple. From here the trail went sharply south along steep green cliffs, and I could smell the ocean. It felt good to be myself, alone in nature, and even the occasional rain couldn’t perturb me any longer. I passed smaller and smaller fishing villages, arriving at Cape Muroto-misaki where it was said Kukai spent time meditating in one of the nearby caves. It was fascinating to read about the history of each new temple I arrived at each had its own story, its own narrative of Kukai, some more fantastic than the others, which when weaved together became a kind of mythological journey. And here I was, living through it vicariously.

Along the trail there are many zenkoyado, wooden structures where pilgrims can sleep for free. After nearly three weeks of hiking, I’d grown accustomed to these, and though I was only about half-way finished the 1200 kilometer stretch, I knew I’d have to stop early. Near Shimanto City I stopped in one of the nearby shelters and was greeted by another man named Nakano, an older gentleman in his 50’s who began every morning by emptying a juice-box of Japanese fire low-grade high-alcohol content sake. That evening we camped together and visited one of the local onsens, or hotsprings, where he told me about his life and that this was his fifth time doing the Shikoku Henro.

“This is what it means to be free,” he communicated, as we stared across the ocean and the dwindling sunset. “Out here, walking, everything becomes simple again.”

I merely nodded. I was lost in the tumult of my own thoughts. Then it occurred to me that this is what the pilgrimage was all about whether you did it as a tourist, as a devout act of spirituality, or for some other reason, all of us were at least connected by that: a yearning for something, a desire to explore our own inwardness.

Between battling typhoons on mountain slopes, coping with hunger and blistered feet, or camping under bridges, the mere act of walking was a way to gain a deeper insight about our own selves. Beside me Nakano laughed again and pulled two more juice-box sake and handed me one. Part of me was sad that I had to cut my pilgrimage short, but the people I’d met and experiences I’d shared struck me as invaluable. One day I would return and finish, that much I was certain. For now, though, it was enough to simply enjoy the brilliant colors of the clouds as the setting sun illuminated them like stained glass.

“We all find what we need to, out here,” Nakano murmured, as if sensing my decision. All I could was smile back. 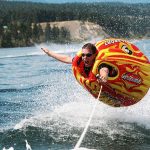 Pilgrimage Through the Mountains – Kumano Kodo 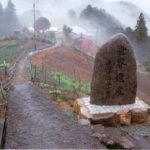